You are here: Home / Get Connected / The Social Web and Competition: Respect the Game 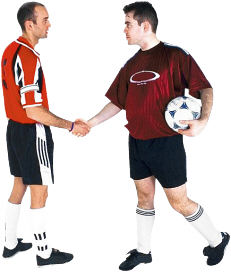 Traveling home from a soccer game with my son yesterday, we discussed a few incidents from his game. I noticed my son seemed to have a good relationship with the player on the opposing team who was playing mid-field against him. I observed a few occasions when they shook hands or exchanged a few friendly words after one or the other had a particularly good tackle against the other.

I asked my son if he knew the young man. He said he never met him but “that kid had sick skills, Mom. It was fun competing against him today.” We discussed another incident where an opposing player executed a slide tackle from behind one of my son’s teammates causing our player to be removed from the game with an injury and the offending player to be removed with a “red card” foul. When comparing the two incidents, my 16 year old son said, “You have to respect the player. You have to respect the game.”

Recently, I have been working with a few clients who are competing in a very tough market and trying to implement new social media marketing plans. In one case, my client has been the target of another local business that has been using the power of ‘anonymous’ rating services to make disparaging comments about my clients’ products and services on the internet.

In another case, a client became “a friend” with a rival through an online community only to have the competitor use their access to “friend” my clients contact list, misrepresent himself as an affiliate and then begin to market to his “friend’s friends” with competing products.

Colleagues have complained about having “competitors” disguised as “friends” market competing products that looked suspiciously like the same content without attribution (i.e. copied).

The openness of social networking can leave small businesses open and vulnerable to attack by opponents without the creativity to develop their own markets and products and who decide all is fair in business.

I love competition! I agree with the proverb “Competition is the whetstone of talent” and I do believe competition gives all of us as entrepreneurs an opportunity to innovate, to make our products and services even better for our customers. We live in an imperfect world so competition brings out the best spirit of innovation in some entrepreneurs while exacerbating the worst character flaws in others.

Henry Ford said, “The competitor to be feared is the one who never bothers about you at all, but goes on making his own business better all the time.” I agree with Ford’s statement but never turn a blind eye to my competitors, even while my main focus is on my customers and on my own plan for innovation. Monitoring your competitors prepares you to capitalize on opportunities and weaknesses, maximize your strengths and head off impending threats.

With that being understood, “Respect the player, respect the game.”

We'd love to hear from you! Please send questions or comments via email to admin@garrbarr.com